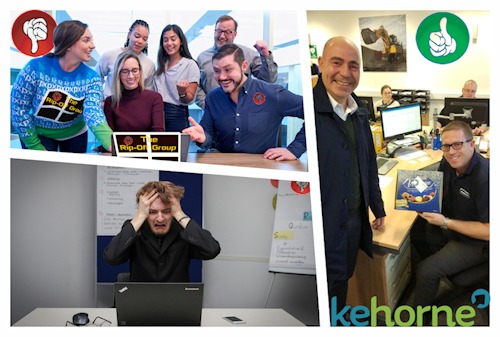 A week after telling you all to ‘Love your customers’ on Valentine’s Day, it’s still a topic of conversation in the Kehorne office because we’re still talking about the news that after the collapse of the Woodford Empire (last year) the 300,000 investors were told at the end of January they were to lose almost one-fifth of their money.

Now, a couple of us at Kehorne DID invest. Not a huge amount admittedly, (we’re not that rich…yet!) but our discussion was around how people are treated. How it can be acceptable to walk all over others or ruin their lives through decisions a business makes or actions taken by that company. And how, often, there is no recourse. We’ve mentioned this in articles before. But that’s because it’s important to us.

We started to think more about the importance of knowing how NOT to treat your customers.

Neil Woodford for example was seemingly quite comfortable with (allegedly) paying himself £9 million before folding the company. How do people sleep at night? I for one, don’t sleep if I suddenly remember I’ve not made contact with a client for a while, even though they’re not expecting me to!

As a team we decided that our overriding statement, our ‘Who we are’ will be this:

We aim to be the most loved digital agency by being responsive, quick, honest, knowledgeable, fair, approachable and consistent.

It says it on our website(s) and we have it on the wall in our office. It’s not difficult to stick to because at the end of the day it’s common courtesy, it’s respect, it’s caring about other human beings and the impact we have on them. For us, the result we aim for – always – is a positive one.

And everything we do centres around this.

But we wonder if too many companies forget about common decency; which is the foundation of excellent customer service. Do they forget that it’s their customers who have an ultimate say in whether their company is a success? If they do, they’re fools!

A quick search online will offer hundreds of examples of poor customer service. Here’s one we found both amusing and yet excruciating in its lack of professionalism and attention to its customer’s dilemma.

The airline in question (BA) was contacted via Twitter after a customer lost their luggage. However the airline took EIGHT HOURS to respond! Not only that, the thread was viewed by over 76K users, and featured all over the world. Nothing quite like demonstrating your incompetence for all to see! 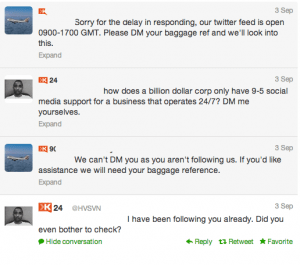 We found this on HubSpot.com and you can see the full story here.

How can these situations even happen we’re asking? Maybe this company is so big it feels it doesn’t have to care so much anymore? Which, as we said is foolish. It can be so damaging for a brand, and often problems that do arise can be so easy to fix if you act quickly and with a degree of ‘give a damn’.