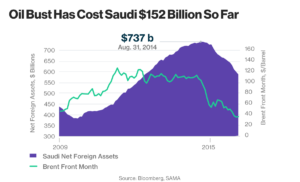 As many of you may (or may not) be aware I’m very interested in the political aspects of world oil prices, and the effect it has on us in the UK, and the world. At the moment I am interested in particular in the situation in Saudi Arabia. Saudi Arabia has $582bn in financial reserves but foreign reserves are still falling by $10bn (£6.9bn) a month, at this rate they have 5 years to turn it around before they run out of money. Whatever the eventual outcome what we do know is that even though the price of a barrel has increased to $50 since February this has still left them in a precarious situation. Riyadh now plans a global bond issue and the debt-crippled bin Laden group is laying off 50,000 construction workers. The Saudi government is set to pay contractors with tradable IOUs. This shows how acute the situation is becoming, coupled with the plans to sell a 5% Stake in Aramco (which is state owned) by 2018, by the time that actually happens this could be desperately needed state funds. The current barrel price has cost the Saudi state $152bn so far and this is just set to continue. Even the current US dollar peg is under threat and this would set off a battle for global oil share.

The thoughts of Saudi in continuing to pump oil at a low price (whereas in the past they would cut supply to increase prices – restricting supply to increase demand) is that they can put out of business their main competition in Russia and in North America (shale oil is considerably more expensive to produce). Whilst they have had some effect on this the North Americans are about to step up production again as the barrel price begins to rise, and with the current oversupply in the market the price of a barrel is set to remain at the current $30 point for some time to come. Mr Pouyanne of Total Oil said the collapse in annual oil and gas investment to $400bn – from $700bn in 2014 – would lead to a global shortage of 5m barrels by 2020 and another wild spike in prices, but first the glut has to be cleared. Eventually the situation will resolve itself when the market equalises – in the cyclical nature of the markets, but we shall have to wait and see if the Saudis will weather this financial storm.

Sources: The Telegraph and Bloomberg