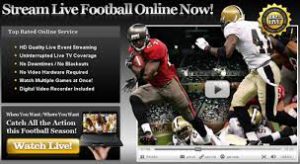 Live Streaming of events is really taking off. In the main it is based around sport, with NBA basketball and NFL American football already well planted. It could be argued that the success of the NFL to live stream games has put the terrestrial coverage out of business as it is now only available online or through Sky Sports.

The growth in streaming is obviously down to the increase in high speed internet and 4G phone coverage, enabling people to now watch live events on their phones.

Facebook has put aside $50m (£38m) for live video and Google’s YouTube said its views of live video was up 80pc year-on-year although the actual figures have not been released so a baseline of actual viewers is not available.

But it is in the sports arena that the most obvious application has occurred, and just recently in Germany and Japan services have started that give users a wide selection of English Premier League football, American NFL, NBA basketball amongst others to watch on live streaming.

The reason behind the initial move into Japan and Germany is purely down to the infrastructure available in these countries. Live streaming requires high bandwidth as well as a constant high quality signal over more of the area than currently available in many other countries.

The situation seems to draw a parallel with the advent of satellite TV, where for many years it was the preserve of the population that could afford this as a luxury, whereas now many of these services are considered essential household items.

So far the main players are Sky, who have now invested heavily in their live streaming services, but still the market is open to smaller players as the main heavyweights (Netflix, Twitter, Yahoo) are still sitting on the sidelines.

Personally I think the analogy with  satellite TV will see it go through a painful period before it really takes off. Imagine – live sports on your mobile phone. Soon we will wonder how we did without it!

We are now used to seeing video on most web sites and in fact its perhaps the best medium to show people what our businesses do. But with live streaming on the horizon I would recommend that anyone who is thinking of a new site keeps in mind this next progression as I’m sure it will become the norm and current hosting solutions should have this as a consideration.

Feel free to contact us at Kehorne if there is anything we can do to help you with your current site or if you just need to discuss your options going forward. www.kehorne.co.uk