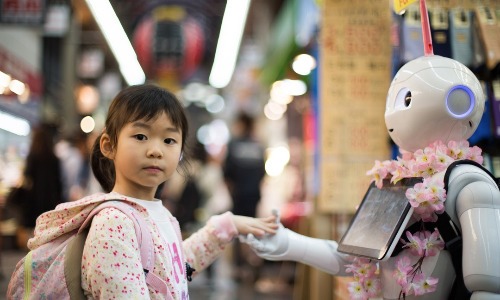 The world of work is changing, more and more jobs are being automated, but it is not necessarily just the jobs that you think it should be that are going. Traditionally we have seen many apparently ‘low skilled’ jobs that require lots of physical power disappear. If we take farming as an example, before combine harvesters were built, the annual harvest created a lot of seasonal work for vast swathes of low and unskilled labour. The use of one Combine harvester literally removed hundreds of jobs for humans. Now I’m sure that not many people were massively upset by this, given that it was badly paid, extremely unreliable and hard work. But what is important is that it is one of the things that have helped to shape how we think the future of work will look.

Unfortunately, that is wrong, Machine Learning is changing all of that, simply put this is software that is able to learn from experience, without being explicitly programmed, much in the same way as humans can. It is able to do in seconds what takes humans hours, so is able to build up millions of experiences in the time that a human would build up hundreds. There is a piece of Machine Learning that you will probably use on a daily basis without realising it. Spam Filters work through Machine Learning, and use that to just mark emails as either ‘Spam’ or ‘Not Spam’.

Many people have been working on this, the first breakthrough that caught people’s imaginations was when a computer managed to beat a human at chess. That though was relatively straight forward, as there are a fixed number of moves that can be made, and also a theoretic ceiling on the number of different ways a game can be played. The real breakthrough in terms of Machine Learning was in 2015 when Google DeepMind was able to beat a human at ‘Go’, which is not only the first board game (it is 2500 years old) but also has almost infinite different ways that the game can be played out. This took an entirely different approach by developers to those that made a computer win at chess. Grandmasters at Go describe how they play using gut feeling and instinct over hard strategy, this makes sense given the sheer number of variations in how the game can be played out. This is also what has made it so hard to get a machine to be able to play and win.

Which jobs can Machine Learning do instead of humans?

So Machine Learning means that there are a lot more jobs that can be done by machines than most people currently think they can. They will be able to mark school exams, give medical diagnosis’s, Replace lawyers for a significant amount of their work, drive cars. Essentially any job that is based experience and making judgements based on that experience.

Which jobs can Machine Learning definitely not do

But there are plenty of jobs Machine Learning is just not able to do, It can’t for example write copy for a new marketing campaign. And the thing that humans do all of the time and is totally beyond Machine Learning is the ability to see a connection between completely unrelated items. The example I have seen is when a Magnetron Radar (that used Microwaves) accidentally melted a chocolate bar, from that Microwave ovens were invented. Machine Learning could not have connected its experience of Radar with Cooking to produce the Microwave Oven.

What does it mean?

This does mean that we are likely to end up with vast swathes of the population being under employed, but with the same amount of products and services being produced. The nightmare scenario is warehouses full of things no one can afford to buy. There are a few scenarios where this can be avoided, the first is that the cost of things will naturally drop, as the cost of production has gone down, so humans will not need to have as much money. The other is that the prices remain the same, the governments tax more, which the companies can afford due to falling production costs. The additional taxes are then used to give everyone a ‘universal wage’ so that we do not need to work as much to get the same income.

TED Talks on the future of work:

GO on a Computer: https://en.wikipedia.org/wiki/Computer_Go