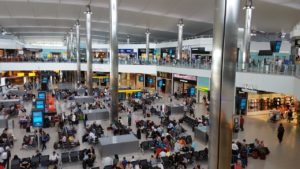 The Airports commission recommended in December last year that building a new runway at Heathrow or Gatwick or alternatively an extension to the runway at Heathrow were all viable options. At the same time they took the opportunity to announce that further work on noise, pollution and compensation needed to be carried out before they could decide which particular option was to be supported.

This is due to be reported on this summer.

There are over 50 new runways being planned around the world with many in the Middle East, Far East and North America. All of these will further erode the current position the UK, and particularly Heathrow, has in global aviation.

The current analysis on noise, pollution and compensation could in fact all run alongside actual work. If the committee had actually made a decision this would help to move the project along, as opposed to delaying making a decision, which effectively only takes us to the start of the process.

As ever this delaying process seems to be a political tactic to ensure no one was upset in the lead up to some crucial votes – namely in the London mayoral election where the Conservative candidate was Zac Goldsmith, the MP who said he would quit if Heathrow was expanded.  The eventual outcome of this contest would always have a direct effect on the decisions for Heathrow, but as to which way this will now go we shall have to wait and see.

Local businesses seem, in general, to be in favour of Heathrow expansion and I know Windsor and Slough would greatly benefit from this. Heathrow currently operates at 98% capacity and any small disturbance in its operations automatically means flights being cancelled, as there is no spare capacity to allow airlines to catch up on these delays. This costs the airlines money and increases the costs that get passed on to its customers.

Flights being delayed may also mean aircraft circling above London for longer than necessary leading to higher costs all round as well as higher pollution as the planes need to stay in the air for longer.

I’ve been in favour of Heathrow expansion for most of my life. The unfortunate few who will be negatively impacted by expansion must surely be financially compensated for the good of the many.

Everyone knows that this is a controversial decision, where the airport that most want expanded, is also the one in the most congested area. But by continually avoiding it, we are just allowing the situation to get worse, and making a decision ever more pressing. With the lead time on building new infrastructure about 10 years, it will be many years before the situation the  resolved and airport expansion completed.

We await a decision, but don’t go holding your breath….it could still be a long way off!