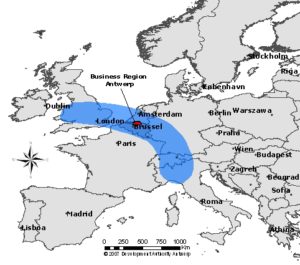 Ever since the beginning of the industrial revolution we have been moving from being largely a rural based society to an urban one, and the largest one, London (known as ‘The London Commuter Belt’) with its 21 million inhabitants is the largest inside Europe proper (Moscow and Istanbul are bigger). This is a trend that is happening globally, with the inevitable creation of ‘Megacities’ and ‘Megalopolis’ (see below for a definition of these). The top seven Megacities are all in Asia, and most of the Megalopolis’ cross over existing country or state borders, making the borders far more porous, and potentially a hindrance to regional growth.

Our future lies in the connections we have with other urban areas, so it is our rail and air links as well as our energy and communications links that make our connectivity with other urban areas stronger, and us all more reliant on each other, regardless of national/state borders. The real positive to this is in helping to prevent conflicts, the best example is Europe, where good connections mean that each city has a vested interest in other local cities, based on locality and common interest, not national borders. We are much less likely to be hostile to a country or region that we share infrastructure and trade with. War inside Western Europe is now virtually unthinkable, but it is where both World Wars started.

Within Europe there is one dominant industrial Megalopolis, called ‘the Blue Banana’ or the ‘European Megalopolis’ that runs from Manchester to London, through the low countries and the Ruhr area to northern Italy. This area is the dominant industrial area in Europe and has a combined population of 93,000,000 people. The UK is on the northern tip of this, and is one of the driving forces to its success, with finance from the City of London, science & innovation, and excellent global trading links.

Of course this is not much different to the Middle Ages, when Europe had an abundance of ‘city states’ as well as the ‘Hanseatic League’, which was a series of ports and trading cities across the Baltic, down to Holland and across to London that had a trading alliance to protect the naval trade routes and provide a common system and infrastructure for all of its merchants.

So in many ways, we are just returning to an old formula, rather than creating a ‘brave new world’, this makes the whole idea a lot less daunting. Personally I think that the sooner we start to ignore what are largely imaginary (and historically shifting) borders, and think of the ‘the Blue Banana’ as the trading region it actually is, the better all of our lives will be. So less ‘nationalism’ and more ‘regionalism’.

Megalopolis      is typically defined as a chain of roughly adjacent metropolitan areas to create a single larger area. As Metropolitan regions expand, they merge with others to form Megalopolis, an example of this is ‘Northeast megalopolis (USA)’ or ‘BosWash’ which runs from Boston, through New York and Philadelphia down to Washington.